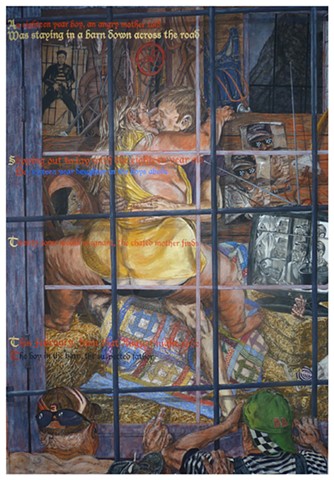 An eighteen year boy, an angry mother told/ Was staying in a barn down across the road/ Slipping out to lay with the eighteen year old Her sixteen-year daughter in the boys abode/ Twenty some weeks pregnant the chafed mother finds/ This February, from that August night rode The boy in the barn, the suspected father

Dante Commedia Inf. V: 136-142 'all trembling, kissed me on my mouth/ A Galeotto was the book and he that wrote it/ That day we read in it no further. While the one spirit said this/ the other wept, so that for pity/ I swooned as if in death. And down I fell as a dead body falls.

From The Newport (Tennessee) Plain Talk Newspaper- Crime Reports: A woman told the Deputy Sheriff that in August, an 18-year-old man was staying in a barn across the road from her residence. She said her 14-year-old daughter slipped out of the house on Aug. 15 around midnight and went to the barn and had sex with the man. On Feb. 6, the mother found out that her daughter is 24 or 25 weeks pregnant. The man in the barn is the suspected father. The daughter had been keeping the pregnancy hid from her mother, the report stated.