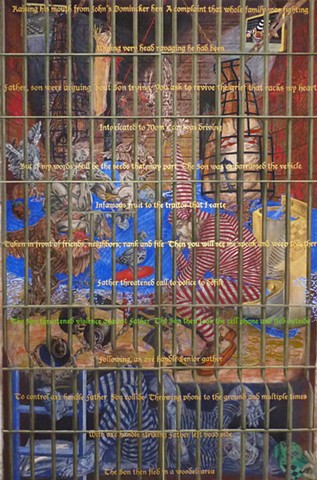 Raising his mouth from John's Dominicker hen/ A complaint that whole family was fighting/ Wiping very head ravaging he had been Father son were arguing bout son trying/ You ask to revive the grief that racks my heart/ Intoxicated to mom's car was driving But if my words shall be the seeds that may part/ The son was embarrassed the vehicle/ Infamous fruit to the traitor that I carte Taken in front of friends, neighbors, rank and file/ Then you will see me speak and weep together/ Father threatened call to police to defile The son threatened violence against father/ The son then took the cell phone and fled outside/ Following, an axe handle senior gather To control axe handle father, son collide/ Throwing phone to the ground and multiple times/ With axe handle, striking father left head side The son then fled in a wooded area

Dante Commedia Inf. XXXIII: 1-9 He raised his mouth from his atrocious meal, / that sinner, and wiped it on the hair/ of the very head he had been ravaging. Then he began: 'You ask me to revive/ the desperate grief that racks my heart/ even in thought, before I tell it. 'But if my words shall be the seeds that bear/ infamous fruit to the traitor I am gnawing,/ then you will see me speak and weep together.

From The Newport (Tennessee) Plain Talk Newspaper- Crime Reports Police were called to a residence on River Road on a complaint that a "whole family was fighting," on April 15, Capt. B---d B----l reported. The victim, a father, who is 64, was very upset. According to his daughter, the victim, and the victim's wife, the father and son were arguing about the son trying to drive his mom's car while intoxicated and without a valid license, the report stated. The son was said to feel embarrassed the vehicle had been taken from him "in front of his friends and neighbors," the report stated. As the father and son continued to argue, the father/victim threatened to call the police and the son threatened violence against the victim if he did that. The son then allegedly took the cell phone, fled outside and challenged his dad to physically stop him. The father then allegedly followed his son outside and grabbed an axe handle as he exited the residence, the report stated. The son then tried to take the axe handle, and both father and son struggled to get control of the handle. The son then allegedly threw a cell phone to the ground, then struck the father on the left side of his head multiple times, but causing no injury. The son then allegedly fled on foot into a wooded area. Police were unable to find the son to obtain his version of the events, Capt. B---l stated in his report.